This is a vegetarian version of our related recipe: Poblano Peppers stuffed with Chicken and Smoked Gouda Recipe — but using Quinoa instead of Chicken as the primary stuffing-ingredient.

A local mexican restaurant featured a dish quite similar to this (but using chicken) that inspired this creation. Our version is a lot less salty, lower in fat, and all around more healthy while still maintaining a lot of the flavor.

The large mild green chiles (Poblanos) used for this recipe are wonderful for stuffing thanks to their relatively thick walls. These are not hot peppers (when green like this), though you may find they have a subtle slightly-detectable warmth that can vary with each individual pepper. The flavor is a bit different than a sweet green pepper, though the poblano will not be too much of a taste surprise if you enjoy peppers in general. Depending one where you live, these beautiful large poblanos should be reasonably priced and abundantly available, making this dish even more enticing.

We have tried to infuse a bit of extra Mexican inspired flavor into our dish with the introduction of some ground chipotle powder (chipotle peppers are simply a smoke-dried jalapeño) and some subtle smokiness thanks to some smoked cheese (we chose a smoked Gouda for this). The core component of the filling is a wonderfully flavorful and healthy cooked quinoa grain with herbs/seasoning. The result is a feast for the senses, though not in a tongue-burning way... this is much more subtle with regards to spice and heat. 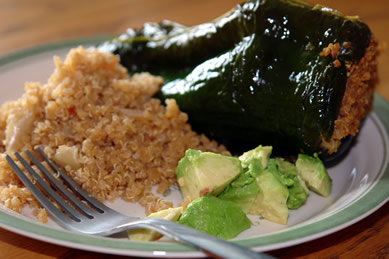 Begin by bringing the water to a boil and adding the quinoa, spices, and onion in a pot on your stove top. Reduce the heat to a simmer and cook for approximately 15-20 minutes until quinoa grain has absorbed the water.

While the quinoa is cooking, use the time to prepare your peppers for stuffing (by cutting a hole at the stem-end, circumscribing the stem with a knife; use the stem to pull your cutout away from the rest of the pepper and then de-seed the pepper). Next chop some small pieces of cheese that will be mixed into the quinoa filling in a bit. The amount of cheese you use relative to the amount of quinoa is your choice.

Once the quinoa is cooked, turn off the heat and move the quinoa to where it can cool (cool sufficiently to avoid burns when stuffing the peppers).

Preheat your oven to 375°F. Start stuffing the quinoa into your cored poblanos, mixing pieces of your smoked Gouda in as you go — the amount of cheese you use relative to quinoa is completely up to you. Any leftover quinoa can be served as a "side" along with your peppers or saved for another meal. Once the peppers are fully stuffed, you may wish to place a thin slice of cheese over the top opening and "seal" the pepper stems back onto the pepper (optional)... I made some this way and some with and without the stems, and the results are essentially the same other than the presentation of the finished product.

Place your stuffed peppers into lightly-oiled cast-iron skillets (or some other oven-safe pan), spray the surface of the peppers with a bit off cooking spray (i.e., spray canola oil), and then bake for 15-25 minutes. Varying the length of time for baking will determine how crispy the Poblano chile texture remains. I prefer my green peppers to retain a little crispness, but if you prefer yours to be completely soft, bake them for the full length of time. If you prefer more of a blackened pepper effect, adjust the heat and bake-time accordingly. Since the quinoa is pre-cooked, the oven time is purely for baking the pepper (and melting the cheese a bit). Remove from oven, serve, enjoy!

Below are some pictures of this gluten-free recipe in various stages. Let us begin with the washed, de-seeded peppers and our chunks of cheese... 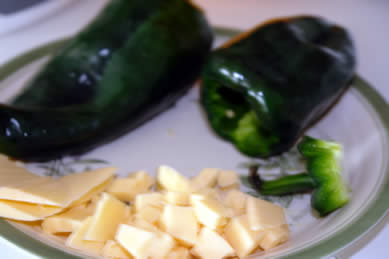 The picture at the top of this recipe-card is a serving suggestion showing our lovely baked quinoa-stuffed gluten-free poblano peppers with a side of extra (remaining after stuffing) quinoa and some diced avocado — which goes quite nicely with this combination. Enjoy!