Creating a "chia slurry" is the key to using chia seed as an easy addition / substitution / alteration / modification ingredient in many gluten-free recipes. This slurry will end up providing a gluten-like (i.e., "glue like") binding power to many recipes while introducing additional moisture and "bounce", elasticity, sponginess, and the like, that you would otherwise associate with Gluten-containing products.

And, when frozen into "chia slurry cubes", these frozen chia-mix cubes have proven incredible in making smoother, creamier, dairy-free "shakes" or "smoothies" or slushies, or whatever. They add an amazing texture-smoothing / gelling quality that thickens up a drink without adding anything unhealthy to the recipe; giving frozen drinks some "creaminess" without any cream.

A slurry is quite simply a highly fluid mixture of water and finely divided material — in this case, that material is chia.

For an example of using this chia slurry in a recipe, see our Gluten-Free Banana Bread (variation from our cookbook) with Chia and Whey Protein Recipe, and also the Gluten-Free & Wheat-Free Dairy-Free Chocolate Pumpkin Spice Diet-Milkshake Recipe. 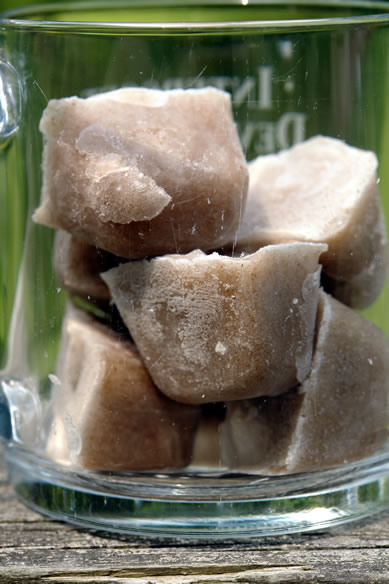 We start by pre-hydrating our Chia Seed. I simply use between 1.5 and 2 TBSP (Tablespoons) Chia Seed per cup of water. The concentration can be varied, and will alter the recipe outcomes accordingly. Sometimes I want a thicker mixture, other times thinner. The amount of slurry I prepare depends on what I am baking, but for now, let's just say I have a few cups of water, and the corresponding proportion of Chia I mentioned... 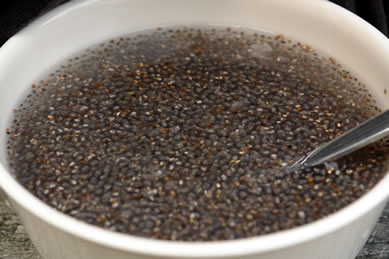 Or, a bit closer look at the resulting hydrated Chia Seed mixture: 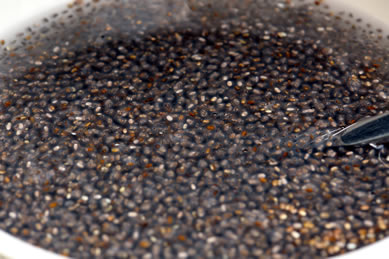 Now, place this hydrated Chia in a blender. I have my trusty VitaMixer for this task, which does a fine job of creating a slurry from the seeds. Here is the before and after look: 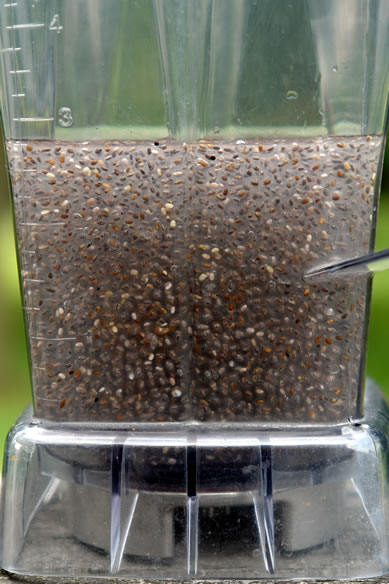 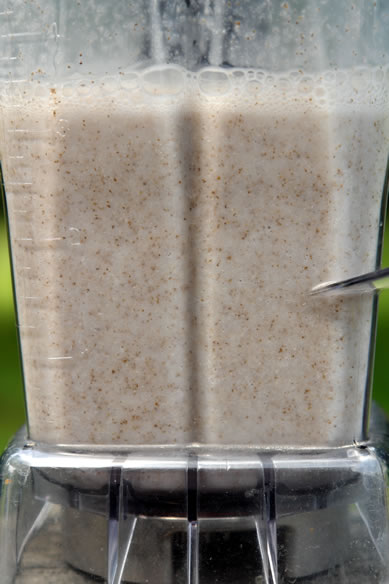 That is pretty much it! You have just created the Chia Slurry to be used in gluten-free recipes where you would otherwise use water, milk, or other liquids (note: some dry-ingredient amount-adjustments may be necessary to achieve optimal substitution and outcome results).

I process (i.e., grind / chop / pulverize) the hydrated Chia into a slurry immediately before I am going to use it in a recipe. I have found this keeps the suspension of particles most consistent, and also it tends to add another important baking element: a bit of air volume (quite useful in breads for example).

You can allow the pre-hydrated Chia Seed to sit around for hours, or days, if you desire, but wait until you are ready to use it in a recipe before mixing it into a slurry. In fact, if you use a lot of Chia in baking your gluten-free recipes, it is a good idea to keep a container of pre-hydrated chia seed in the fridge all ready to go (saves on hydration time later).

Another use I have for my slurry concoction that I created on a whim is chia-seed-ice-cubes. Just take that freshly-blended Chia-Seed Slurry and pour it into ice cube trays and immediately freeze.

These frozen chia-mix cubes have proven incredible in making smoother, creamier, dairy-free "shakes" or "smoothies" or slushies, or whatever. They add an amazing texture-smoothing / gelling quality that thickens up a drink without adding anything unhealthy to the recipe; giving frozen drinks some "creaminess" without any cream.

The reason I make the chia ice cubes (instead of just adding regular water-only ice cubes to a blender with pre-hydrated chia seed) is a simple one: achieving optimal coldness and lowest temperature for best shakes, smoothies, and frozen drinks. Note: if you don't freeze the chia like this first, do not expect the same results.

Other Recipes that use these Formulations:

Look for recipe and recipe variations and substitutions (using the Chia Slurry or Chia Ice Cubes) throughout the Gluten-Free Recipes Library Index.