What many people do not realize is how mild the taste of pumpkin on its own really is. Therefore, so often pumpkins are only associated with the complementary flavors of cinnamon, nutmeg, ginger, allspice, clove,... and we tend to forget what pumpkins taste like in their natural state.

Pumpkins are such a wonderful, healthy gluten-free food, it is a shame to not find ways to use them more often than just the standard gluten-free desserts like pumpkin pie, pumpkin bread, and so forth. They are a squash, and they have a flavor, on their own, that is nearly as mild as what would be found in a Spaghetti Squash. The flesh is tender, low in calories, of a low glycemic index, and full of beta-carotene and natural fiber. They are quick and easy to prepare, and keep for a nice amount of time prior to cooking, and after cooking the flesh can be stored frozen indefinitely for later consumption. 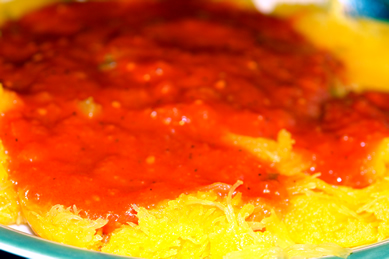 This very simple "recipe" leverages my previous gluten-free recipe that I posted here: gluten-free baked pumpkin recipe. In fact, there really is not much more to be done - just prepare the baked pumpkin as described there, then top with your favorite pasta-sauce!

I love this dish! I find it as enjoyable as any gluten-free pasta, and had I not been on a gluten-free / Celiac Disease diet, I would still work this recipe into a "normal" diet along with standard semolina pasta - it's that good.

I topped this particular batch of pumpkin "pasta" (pictured above) with my favorite pre-made bottled sauce: Gia Russo's Hot Sicilian Sauce; which, though not specifically labeled gluten-free, contains no gluten-containing ingredients in the sauce and no warnings of it being prepared in a shared facility or such. The spicy/tangy nature of this tomato sauce makes for a really flavor-packed "pasta" dish, and one that is low in calories and packed with nutrition.